After having looked at crop rotation in a previous newsletter, this article is to describe the major diseases that producers have to face in soy production.

Over a 100 pathogens attack soybean, but only a small percentage of these are of economic importance. Yield loss may vary between 10 % and 30 %. Soybean diseases can be caused by viruses, bacteria, fungus or nematodes. The integrated pest and disease management approach is based on several control principles that ideally should be combined.

Losses are mainly provoked by the combination of multiple diseases, and not by an individual disease. A comprehensive disease management is based on the following principles:

Exclusion includes legislation and disease-free seed. Exclusion is useful in an environment presently free of a pathogen.
Legislative embargoes, quarantine, or inspection of seeds prevent introduction of plant pathogens and pests into new areas. Important soybean diseases whose spread can be limited by exclusion include:

Although this is often not realistic in practice, the reduction of loss below certain economic levels is possible in many cases. Two possible methods of eradication are crop rotation and tillage.

Crop rotation is a powerful tool for the management of soybean diseases, particularly if combined with grains, such as maize, sorghum, and wheat. Rotation with resistant cultivars can also be effective in controlling soybean cyst nematodes.

Tillage eliminates crop residues and is an effective mean to reduce over-seasoning of most foliage- and stem-infecting bacteria and fungi. The majority of these pathogens survive on infested residues. When the residue decays, the pathogens die.

These techniques include the use of pesticides and cultural control for disease management. Pesticides include seed treatments, fungicides applied on the plant and nematicides. Cultural control means maintaining an optimum range of plant nutrients and soil pH, avoiding excess of water or water stress (draught), planting high quality seed, controlling weeds, obtaining optimum soybean population, and harvesting at maturity.

The use of resistant cultivars is the most economical and efficient method of disease control. If chosen properly, the yield is often better.

Management of soybean diseases and pests cannot be accomplished in the long-term by only one control method. Integrated pest management combines multiple agronomic practices while considering economic figures. 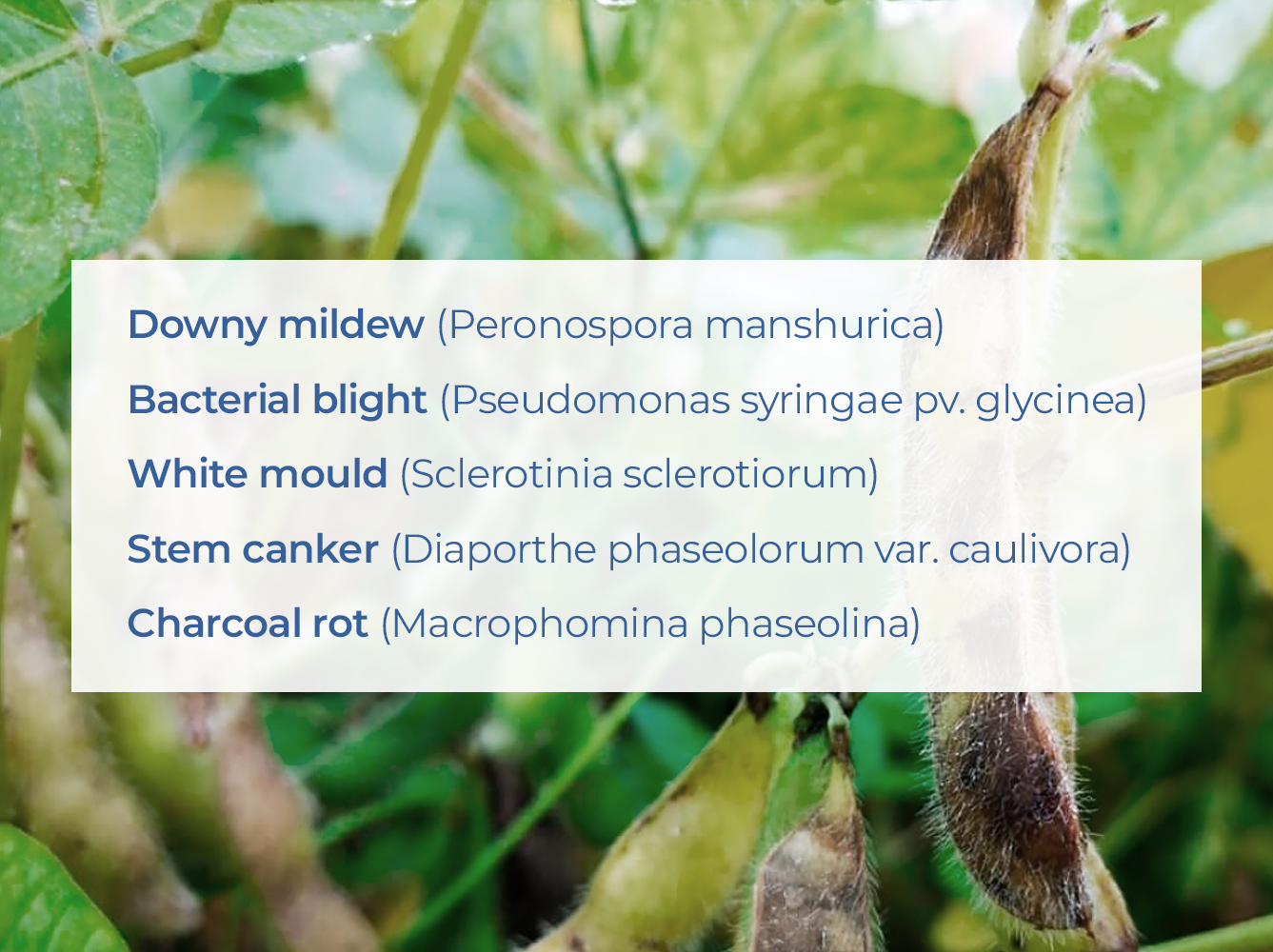 Downy mildew causes pale green to yellow spots or areas on the upper leaf surface. Infected pods show no visible symptoms, but the seed can be smaller. Mould and spores of the fungus can be seen on the under surface of leaves, visible as yellow spots that give the leaves a water-soaked appearance. Seeds at harvest may be covered with mould and spores.

Bacterial blight [2] is caused by a bacteria that is most common during cool, wet weather and can affect all parts of the plant above the ground, but is most visible on the upper part. Infections begin as small, angular, water-soaked spots that turn yellow and then brown as the tissue dies. The spots darken and are surrounded by yellow-green halos. Spots often merge to form large, dead patches on the leaves that may fall out. Infected leaves usually remain on the plant.

Tolerant varieties (resistance) with appropriate maturity that are upright and non-bushy.

Fungicides may be necessary in high-risk fields applied correctly and in a sustainable way (protection).

Stem canker [3] is usually noticed during the latter half of the growing season when dead plants have dried leaves that remain attached to leaf stems (petioles). The disease often represents itself in field patches.

Reddish-brown stem lesions develop during the early reproductive stages of plants in the vicinity of a stem node. As the disease progresses, the brown or black lesions enlarge longitudinally. This causes that the plant’s flow of nutrients and water is disrupted.

Charcoal rot generally occurs when plants are under stress (e.g. water stress), but seedlings also may be affected. On emerging seedlings brown lesions can be observed and later in the season the leaves on infected plants are smaller, become chlorotic and turn brown. The taproot and lower stem may be streaked with light grey. At advanced states of the disease the lower stem shows a grey discoloration.

Reduce or avoid drought stress using reduced seeding rates (protection).
Apply reduced tillage and crop rotation with crops that are not affected by charcoal rot, such as cereal grains (eradication).

Plant soybean cultivars that have lower levels of susceptibility (resistance).