Does the Brazilian soybean production increase pose a threat on the Amazon rainforest? 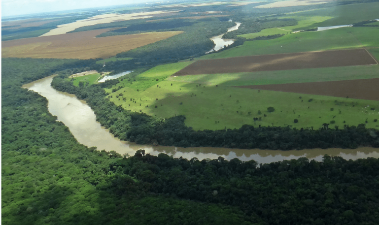 The mission of Embrapa has a unique commitment, which is the technological development strongly linked to sustainable solutions. This vision has been a constant throughout its 46 years of existence, reflecting a position of the Government, a yearning of the society and a posture of the Brazilian farmers. Sustainability implies better agricultural practices, more environmentally frien-dly, with respect to the condition of the workers in agriculture, and that allow the adequate return to the farmer’s investments. This vision applies to all cul-tures, husbandry and regions where Embrapa operates.
Nevertheless, due to the extension of the area currently occupied – about 36 million hectares – and to the perspectives of strong demand in the coming decades, soybean production is the most challenging, requiring increasing attention not only from Embrapa, but also from all public and private sectors, involved with Brazilian agriculture.
At the United Nations Conference on Sustainable Development (Rio+20), held in Rio de Janeiro, Brazil (June 2012), Member States adopted the outco-me document “The Future We Want”. As a result, it was decided, among other resolutions, to launch a process to develop a set of Sustainable Development Goals (SDGs) to build upon the Millennium Development Goals (MDGs) and to establish the UN High-Level Political Forum on Sustainable Development.
Brazil is fully aware of its commitment to the UN’s 17 SDGs, reflected in public policies and attitudes aimed at eliminating illegal deforestation and drastically reducing greenhouse gas emissions. To do so, Brazil has the most severe forestry legislation in the world, imposing restrictions on land use change that have no parallel in other countries. For this reason, Brazil uses only 7.8% of its territory for agriculture, preserving almost nine times more area. Embrapa demonstrated that Brazilian growers preserve inside their properties, at their own costs and responsibilities, 25.6% of the Brazilian territory, which is far superior to most other countries.

This publication has the specific objective of demonstrating that there is no risk of the Amazon forest being threatened by deforestation as a consequence to the need of expand soybean production in Brazil, either due to short-term circumstances – such as the tariff war between the United States of America and China – or by market factors as long-term demand. This is because all sectors involved with the soybean production chain in Brazil, public or private, have a clear agenda that foresees the sustainable advancement of soybean production in Brazil. This advance will occur primarily in anthropic areas, es-pecially those currently occupied by pastures – liberated by the continuous improving of the zootechnical parameters -, and by the increase of soybean productivity. Definitively, Brazil will not admit illegal deforestation in any biome, for occupation by agricultural activities.